I spent Saturday with my LUIP Ambassador friends, first at Kingston University and then exploring Hampton Court Palace. Our time at Kingston was wonderfully impelling because we were led through an entrepreneur boot camp by Dr. Martha Mador, the head of Enterprise Education Strategy. Dr. Mador began by explaining the entrepreneur process:

After her thought-provoking explanation, we spent the next hour or so working through the entrepreneurial process ourselves. We split into groups, were given photo cards, and told to brainstorm a list of problems based on the pictures we had. The pictures were quite nondescript– a woman running through a field, a row of wind turbines, a person helping another climb a rock–but from those pictures we generated 10 general problems that could be fixed.

We could even write on the tables…I was awed. English majors don’t get to write on much, other than notebooks.

After generating a list of problems, we chose one and brainstormed solutions to the problem. From there, we created a viable solution and developed and pitched our service to the group. My group decided to focus on the lack of work-life balance for many professionals. We developed a company called Stress Less, a consulting agency that businesses could hire to help convert their offices so that they promoted a more healthy work-life balance. Our pitch even had a jingle, set to the tune of ‘Call Me Maybe’. We won the ‘Best Brand Name’ award…go Team Stress Less!

After boot camp we headed over to Hampton Court Palace, the palace of King Henry VIII (the one who created the Church of England, and had 6 wives in his attempts to have a son. He also fathered Queen Elizabeth I, who is by far my favorite English monarch.). The palace was beautiful, but I was much more enamored with the grounds. The gardens were absolutely stunning, especially the ones along the bank of the Thames. And I was impressed by how successfully lost we became while wandering through the maze. Most of all, I couldn’t have chosen a better group of friends with whom to spend the afternoon. 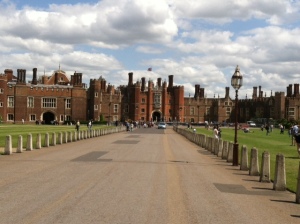 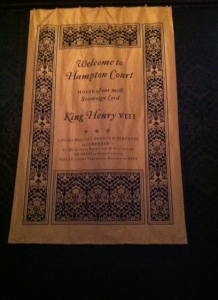 The English love their roses. Especially those Tudors. 🙂 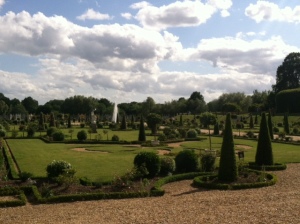 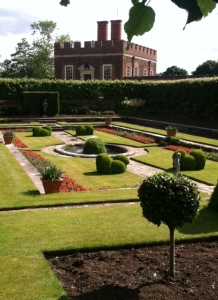 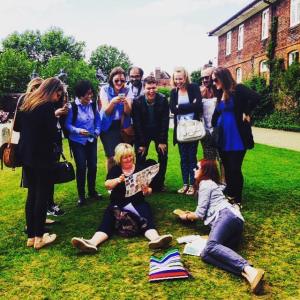 Kim and her band of merry ambassadors. Photo Cred: Divi

Being guided through the creative process of identifying and developing a business was unexpectedly motivating. I left boot camp feeling like I could actually create a viable business–on paper, anyway. I started brainstorming ventures I would be interested in and that might actually work. However, after my original elation wore off, I realized I would have some serious work to do on the numbers side of developing a business. Let’s be honest: although I find an odd satisfaction in getting the correct answer on a math problem I am nowhere near confident enough to trust a business’s finances to my numeracy skills. Creates a nice opening for a partner, though. Any takers?